COCA and Mango Tree Restaurants Worldwide is meeting passenger demand for real Asian food in travel hubs, and aims to offer dishes that are so full of flavour they will attract customers from all around the globe. Mark Lane spoke to Managing Director Trevor MacKenzie about the continued growth of the Mango Tree Kitchen concept in airports.

Trevor MacKenzie describes himself as an ‘accidental restaurateur’. That is remarkable when you consider that as Managing Director he has overseen the growth of Thai business COCA and Mango Tree Restaurants Worldwide to become a US$90 million turnover operation. He is now responsible for more than 70 restaurants across 14 countries, with a target of breaking through the century barrier over the next few years.

That expansion is currently being spearheaded by new Mango Tree restaurant and café openings in airport and railway stations in key Asia Pacific markets including China, Japan, Thailand and Singapore. Five such eateries commenced trading in 2019 and three more Mango Tree-branded operations – one at Singapore Changi and two at Guangzhou Baiyun airports – have already opened their doors this year.

So how did a Canadian, born in Kamloops, south-central British Columbia – whose early adult life included a spell as a cowboy in the Rocky Mountains – come to preside over one of Asian cuisine’s finest international restaurant operations?

The story begins with MacKenzie moving to Vancouver in 1988 and setting up a contracting business with his brother. Destiny intervened when a chance stint bartending at night [to help MacKenzie pay for an expensive apartment he had rented overlooking the stunning seafront in Vancouver] introduced him to the buzz of the food & beverage business.

The venue was a fledgling fine dining restaurant called Blue Water Café & Raw Bar, which went on to become known as one of Vancouver’s premier restaurants. He was an instant hit in his bartending role and later shunned promotions to management level. Instead, he became the highest grossing sales waiter at the venue, a status he holds to this day. “Back then I prided myself on giving people memorable experiences, and that has been my mantra in developing the Mango Tree restaurant business,” MacKenzie says.

His big break in the restaurant business came during a brief holiday stop-over in Thailand in 2003, where a “chain of events”, in MacKenzie’s words, resulted in a meeting with Mango Tree Worldwide and COCA Holding International CEO, cook and entrepreneur Pitaya Phanphensophon.

The now-retired Phanphensophon, the host of a popular cooking show on Thai television, was the second generation owner of the family Thai COCA Restaurant business, which had opened its first dining venue in 1957. A second brand, Mango Tree, opened its first restaurant doors in the heart of Bangkok in 1994. The pair instantly bonded and later Phanphensophon gave MacKenzie the hospitality industry opportunity he had been searching for.

MacKenzie recalls that first meeting with fondness. “When I came to Asia I didn’t really appreciate what real Asian cuisine was,” he admits. “When Pitaya invited me for my first lunch with him at a COCA restaurant, he said ‘what would you like?’, and I said ‘chop suey or chow mein is fine’. He laughed and said ‘that’s American Chinese food, you won’t find that on our menu!’.” 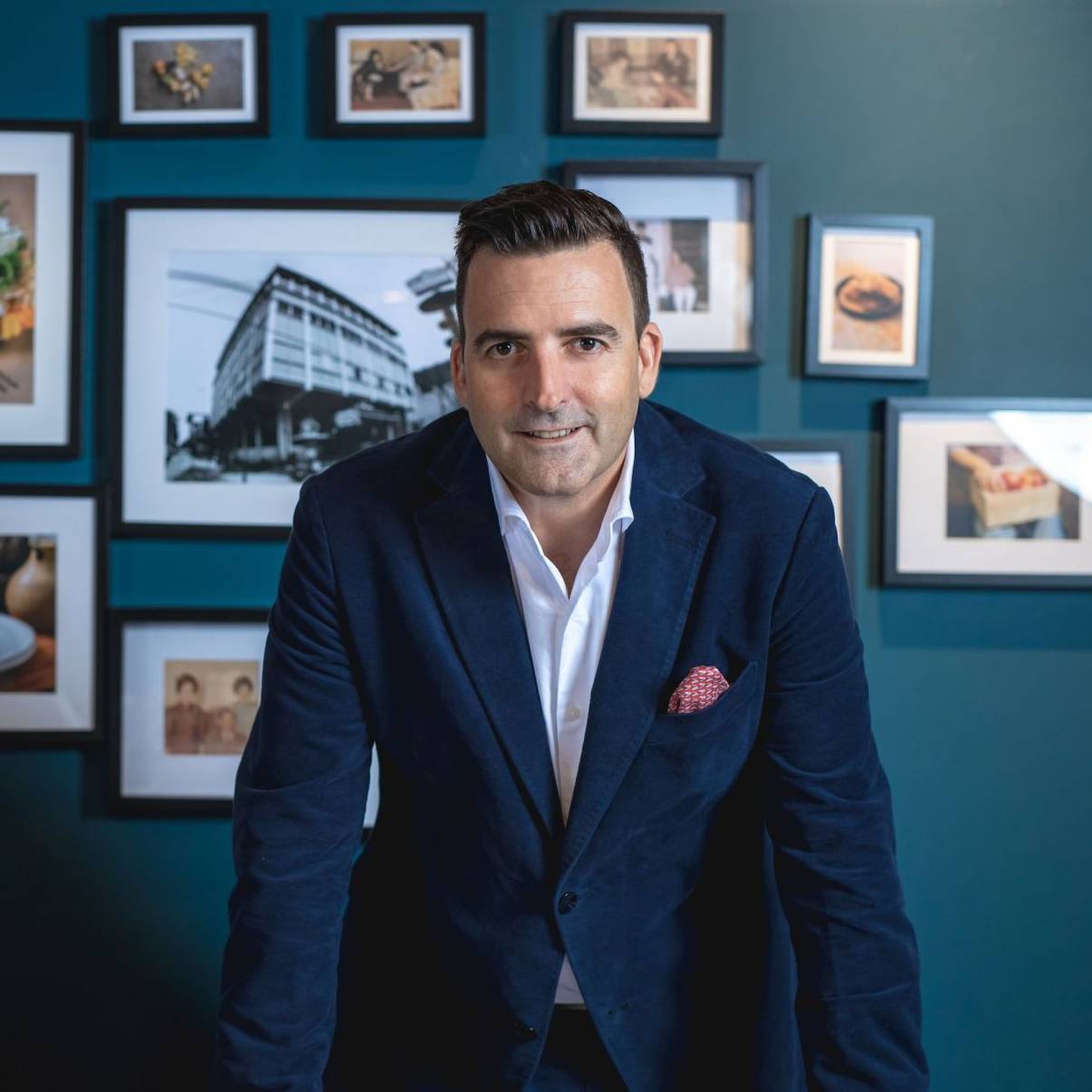 Aiming high: Trevor MacKenzie expects his group to break through the 100 restaurant barrier in the next few years

MacKenzie’s love of the COCA and Mango Tree cuisine and his education into what makes great, authentic Thai, and Asian food, began that day, courtesy of the man he describes as his “intuitive and visionary mentor”. According to MacKenzie, Asian food is rapidly growing in popularity around the world because it is “full of flavour and not so one-dimensional”. He adds: “It is based on fresh ingredients and not the processed foods you often find in the US and Europe in particular.

“These days, you won’t see me eating processed food like you have at McDonald’s, even though I do admire them as a restaurant group. I have actually watched the McDonald’s founder movie multiple times; it is very inspirational.

“Although the likes of McDonald’s still have their place in modern day dining, more and more people are seeking healthier foods, and authentic Asian food like ours fits that bill as it is generally ‘farm to table’ and cooked fresh. It’s not often you can find food like this in airports in particular and we are starting to make big inroads into changing that.”

“I prided myself on giving people memorable experiences, and that has been my mantra in developing the Mango Tree restaurant business.”

After Phanphensophon appointed MacKenzie MD of COCA and Mango Tree Restaurants Worldwide, he quickly identified Bangkok Suvarnabhumi Airport as a “natural location” for a Mango Tree-branded restaurant, with Mango Tree Kitchen opening there in 2006. The lessons learned over the ensuing years operating there have eventually led to the current focus on travel retail expansion.

“After 16 years living in Asia and travelling the world I am in and out of airports weekly,” says MacKenzie. “When I started travelling with my Thai wife, Nit, we had a hard time finding good Asian cuisine at airports. I knew this couldn’t be right – my stats say 61% of travellers worldwide are of Asian descent and the middle class there is growing, constantly bringing more people into airport travel. While Asians do like to try new foods, after two to three days they crave rice or noodles of something that is familiar to their taste buds, not least when travelling through airports.

“And while there are usually some Asian restaurants wherever they travel it’s not always authentic due to the availability of ingredients, and local tastes. I saw a niche and have been an advocate of the need to have real Asian food in travel hubs for the last three years now, educating airports, operators and even pushing our existing franchise partners to seek airport locations.”

Mango Tree’s brands range from the first tier full-service Mango Tree restaurants to the second tier Mango Tree Café and Mango Tree Bistro, which MacKenzie describes as “stylish venues that offer lively social dining for the millennial generation”. The restaurant group has also recently added a fourth tier in the form of Mango Chili, created for price sensitive, younger markets. But it is the third tier brands that are currently driving the restaurateur’s growth, including Mango Tree Kitchen, which focuses on providing eat-in and take-away dining in busy locations such as shopping malls, airports and railway stations.

MacKenzie says Mango Tree has ambitious plans to expand in new travel locations. “We have our eye on more major international hubs in Asia and Europe, and we would really like to land in North America very soon,” he explains. “You will see a few more airport openings in Asia this year and I am confident we will secure our first opening in a major European airport this year. We have many irons in the fire.”

Although Mango Tree’s core menus are consistent from country to country, the brand is mindful of local tastes and adds food options accordingly. “Most of our menus have the same core dishes but we look to every market and think about how can we connect with the local diner and make something with a food we know they specifically like? For example, in the Middle East we added lamb dishes, while in China we serve a lot of seafood or signature beef noodles. In Japan we made a special coriander Thai salad for the menu. This keeps our outlets relatable, relevant and very approachable.”

MacKenzie believes that Mango Tree has taken the many specialist challenges faced by travel F&B businesses in its stride. “We are experienced restaurateurs so all the labour and logistics challenges are normal for us to handle. Probably the biggest challenge is the airports themselves realising or wanting an authentic Asian concept versus some home-grown Asian concept.

“We are able to keep our authenticity as we have a central kitchen in Thailand that ships around the world and makes it easy to train any cook and keep our quality and consistency, which are core values for us.”

It is an approach that has paid huge dividends. In driving the franchising of the Mango Tree brand, MacKenzie and his company have picked up a slew of prestigious awards, including Outstanding Thai Franchise to the World, the Excellent Franchise Leadership Award, a nomination for International Franchiser of the Year and a Q Mark Award from the Thailand Department of Import and Export, and the Prime Minister’s Export Award. In 2018, Mango Tree added to its honours when one of its Japanese locations won the Best Individual Food & Beverage Offer of the Year in a Railway Station Award at The Moodie Davitt Report’s Airport Food & Beverage (FAB) Awards.

MacKenzie has previously stated that he wants 100 Mango Tree and COCA locations open by 2025, and he has no doubts that this will be achieved.

“While every year a few may close because of lease expiries, we have a target of opening 10-12 outlets a year,” he explains. “Knowing what I have in store for this year already, we will surpass 80 in 2020 and then realistically we should be able to achieve the target by 2022 or 2023. I have publicly announced 2025, as I don’t want to sound complacent. Years ago nobody believed I could hit 50, so I feel very confident.”

Thai food on the go: The airport Mango Tree Kitchens offer a variety of takeaway options