SINGAPORE — Rosalind Tay left her job in April after she reached Singapore’s retirement age of 62, but she was far from ready to call it a career.

“I assume I will be living until 90-plus, like my parents, so I cannot survive based on my current savings,” said the former employee of a baby milk formula company. She said that medical bills are expensive, she wants to travel more, and she hopes to stay active to ward off dementia and other chronic diseases.

“I want to work as long as my body can.”

Singapore and other aging Asian societies are beginning to adjust their labor systems to accommodate people like Tay — and keep their own public welfare burdens in check. The city-state and governments across the region have started discussions on raising the age at which workers are expected, or in some cases required, to retire, delaying the start of pension payouts. But tapping the potential of senior workers is likely to take a lot more than just changing a number.

Singapore’s citizens and permanent residents aged 65 or older accounted for 13.7% of the population as of June 2018, up from 8.7% in 2008, making it one of the fastest-graying countries in Asia. People are also living longer: Singapore’s average life span in 2040 is expected to be 85.4 years, third-highest after Spain (85.8) and Japan (85.7), according to a study last year by the Institute for Health Metrics and Evaluation in the U.S. In an interview with the Nikkei Asian Review in May, Singaporean Deputy Prime Minister Heng Swee Keat posed a key question his government is facing: “If our people are living longer, how do we create a structure that will enable them to continue to work if they wish to work?”

He said the city-state needs to deal with demographic changes to achieve what it calls “productive longevity.”

One challenge is to ensure seniors have the skills they need. Tay is enrolled in a program offered by the nonprofit Center For Seniors, where participants — mostly in their 50s and 60s — get a refresher course in preparing for job interviews and tips on maintaining motivation. “I learned the importance of being open, confident and willing to learn,” Tay said after a CFS seminar in early June. An average of 3,000 people attend various CFS programs each year.

Increasing the number of seniors in the workforce is seen as a crucial step toward shoring up Asian countries’ labor pools. 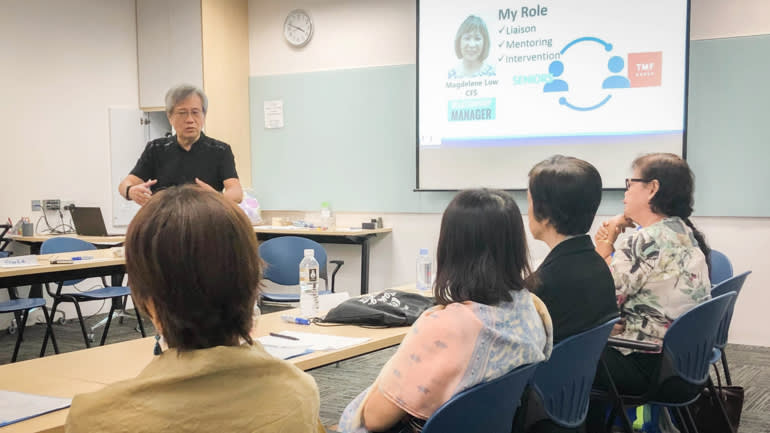 Singaporeans attend a job seminar organized by the Center For Seniors on June 10. (Photo by Kentaro Iwamoto)

“Raising the retirement age is an urgent matter to prevent a labor shortage as a result of an aging population,” said Doan Mau Diep, a deputy minister in Vietnam’s Ministry of Labor – Invalids and Social Affairs.

Hanoi plans to raise the retirement age to 62 for men and 60 for women, from the current 60 and 55, based on a proposal to the national assembly earlier this year.

Vietnam’s working-age population is decreasing and its dependence ratio is rising, the authorities say. Official statistics show that only 2 million people entered the workforce in the five years to 2018; fifteen years ago, 1.2 million were joining every year. The unemployment rate remained just 2% in 2018.

At the same time, the average life span has increased to 71.1 years for men and 81.3 years for women.

Thailand is grappling with similar issues. The country’s central bank says the aging population is likely to slow gross domestic product growth by 1.5 percentage points over the next decade.

“On average, the country’s GDP growth was around 5% per annum for the past 10 years,” said Don Nakornthab, senior director of the Bank of Thailand’s economic and policy department. “As society ages and the workforce shrinks, Thailand’s GDP growth could be at 3.5% annually over the next decade if this structural problem remains unsolved.” Active seniors are arguably becoming as important as robots and automation in keeping Southeast Asia’s second-largest economy running.

On May 21, Prime Minister Prayuth Chan-ocha’s previous junta cabinet approved a move to extend the retirement age for civil servants who will reach the current threshold of 60 in the next fiscal year. By how much is a question left for his current government.

This has sparked an intense debate among bureaucrats and intellectuals. The Office of the Civil Service Commission has suggested a new retirement age of 63. The Thailand Development Research Institute would like to see it raised to 65 in both the public and private sectors. 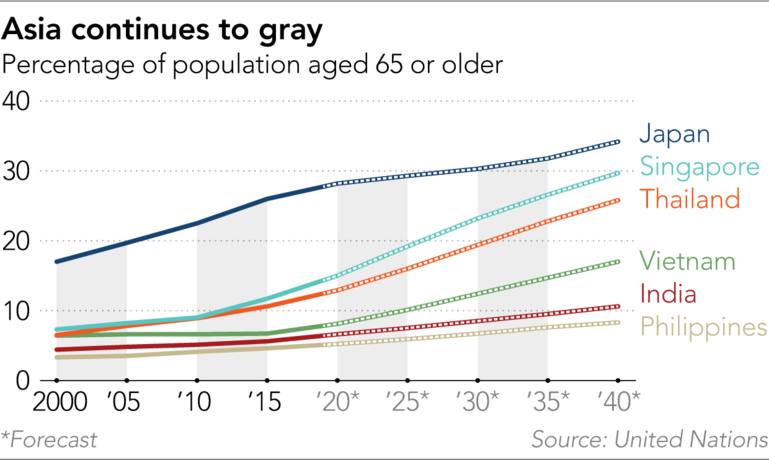 As for Japan, the world leader in aging, Prime Minister Shinzo Abe on June 5 unveiled a draft update to his economic growth strategy. One of the new initiatives is to push companies to let employees work until 70.

The government wants large corporations to do more to carry the burden of the aging society and swelling pension outlays. Companies are beginning to relent: The four biggest steelmakers in April announced they would raise their retirement age to 65 from 60 in 2021.

Nippon Steel said it is “doing its part” to help Japan overcome the pension crisis and aging population.

Company officials also noted that, although steelmaking is now largely automated, it still requires human skills and they need older workers to pass on their knowledge. The industry has about 200,000 workers in Japan, and its decision could prompt other manufacturers to follow suit.

When it comes to China — the only country with more than 200 million seniors — many experts have called for raising the official retirement age beyond 60. Beijing faces the dual challenges of an aging population and declining births, which can cause governments to fall behind on pension payouts.

Still, while policymakers are eager to get more seniors working and some companies see the wisdom of it, not all employees and employers are happy about pushing back retirement. 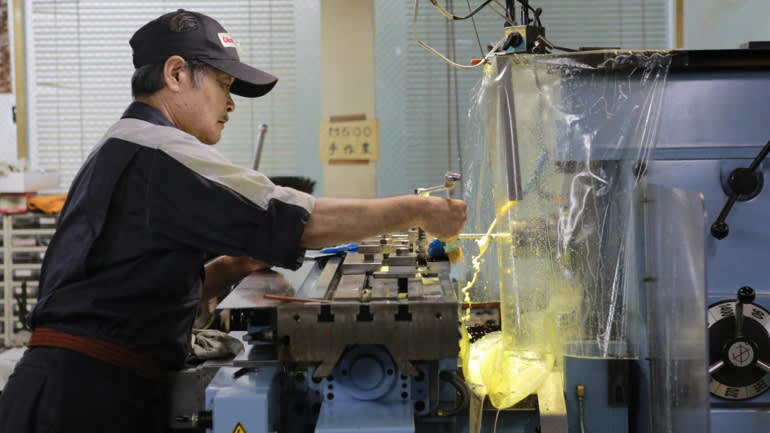 The Japanese government wants large corporations to do more to carry the burden of the aging society and swelling pension outlays. (Photo by Hideki Yoshikawa)

Pham Quynh Tran, a 45-year-old worker at a confectionery company in Vietnam’s southern Dongnai Province, has been on the job for 25 years and thinks another 10 is enough. “Extending the working age is only suitable for those who work in special fields, such as education or research,” she said. “I don’t think the health condition is good for workers at factories like me.”

Tran is skeptical about the shortage argument, since 100,000 Vietnamese go overseas every year as part of a labor export program. “Only officials who work for an authority or the government and get many perks are happy with the retirement age proposal,” she said.

Likewise, the head of a cosmetics company in Ho Chi Minh City who spoke on condition of anonymity said he is concerned about the plan. He said his company needs younger workers and the change would increase labor costs. If the proposal is approved, he fears he will have to restructure the company’s salary and reward systems, as well as relocate many older employees.

The yearning for youth is still strong in corporate Japan, too. “Many executives think older workers tend to be less amenable and harder to work with,” said Hideki Oe, a former Nomura banker and retirement consultant. “The truth is companies want to hire young people if it’s possible.”

Most Japanese companies continue to provide some work for employees after they retire at 60. Employers with a retirement age of 65 are still a minority and tend to be concentrated in labor-intensive industries, such as health care, restaurants, hotels, construction and delivery, data from the labor ministry shows.

The Philippines, for its part, is bucking the trend toward delaying retirement. The House of Representatives recently approved a measure allowing government workers to retire at 56 if they so choose — rather than 60 — and still receive full benefits. “To those who do not want to serve anymore, government employees can retire earlier,” Representative Antonio Tinio, the lead proponent, said. “It will be better for morale as a whole.” Elsewhere, though, the reality is that policymakers, employers and workers are all under pressure to adjust to changing demographics. As people work longer, they will need an array of social systems in place, from education to keep up with new technologies to infrastructure upgrades — especially in less developed countries — that ensure it is safe and easy for older individuals to commute.

In many Asian countries, “older people did not have a lot of education [when they were young],” according to Thang Leng Leng, an associate professor at the National University of Singapore. She pointed out that re-education and retraining are crucial for societies to bring more seniors into the workforce and ensure they are productive.

Thang said governments also need to consider seniors’ work-life balance if they want them to put off retirement. “A lot of people don’t mind working, but they don’t want to work all the time,” she said. “In trying to get people to work longer, there’s really a need to restructure work.”

Beh Swan Gin, chairman of Singapore’s Economic Development Board, told the Nikkei Asian Review, “We have to re-imagine how we can create an economy where [seniors] can productively contribute.”

He said the government should raise the retirement age “at a pace where employers are able to cope,” since it will take time to change their focus on recruiting young people.

“How do you have this workforce where you have very different generations, all [with] different needs?” Beh said. “How do you combine that so that [your] operations do even better? It is a journey we all have to go through.”

Henry Quake, an adviser at the Center For Seniors in Singapore, said it is important for societies to help older citizens make the most of their talents. “The senior,” he said, “is a gold mine.”

Nikkei staff writers Mitsuru Obe in Tokyo, Masayuki Yuda in Bangkok and Mikhail Flores in Manila contributed to this story.