After Struggling to Deliver in China, Carrefour Packs Its Bags 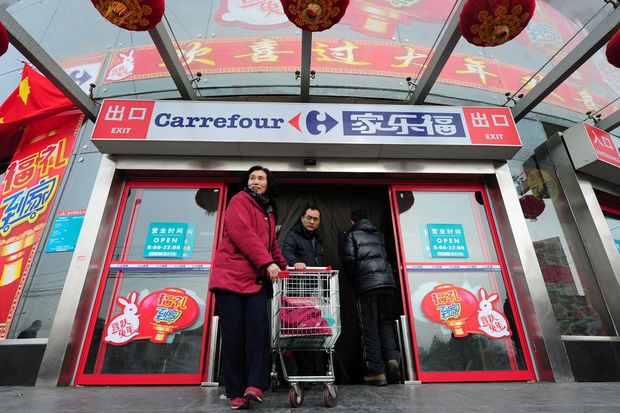 Shoppers leaving a Carrefour store in Beijing in 2011.

BEIJING— Carrefour SA, one of Europe’s largest grocery retailers, is unloading most of its operations in China, where big-box retailers are struggling to keep up with nimble delivery providers that are winning over shoppers.

The move also marks the latest retreat by a Western company in China in the face of stiff competition from homegrown rivals.

Carrefour is selling an 80% stake in its China business, including more than 200 stores, to Nanjing-based retailer Suning.com Co. for about $700 million. The French company, once a dominant force in many Chinese cities, saw its sales in the market fall 5.9% to €4.1 billion ($4.67 billion) last year.

Western companies, lured by a once surging Chinese economy, often find the country brutally competitive and fraught with regulatory hurdles. McDonald’s Corp. , Hewlett-Packard Co. and Uber Technologies Inc. are among those that have pulled back or changed strategy in recent years.

The challenge to foreign companies has become especially intense in sectors that rely on delivery, as local competitors have ramped up their logistics networks to meet Chinese expectations for speedy service.

To compete, brands such as Walmart Inc. have either partnered with one of China’s e-commerce giants or simply bowed out. Earlier this year, Amazon.com Inc. sold its third-party online marketplace in China to a competitor after years of declining market share.

Carrefour has tried to shore up its China business, including a partnership last year withTencent Holdings Ltd. to benefit from the tech giant’s digital expertise.

Delivery is emerging globally as one of the biggest puzzles facing the food business as consumers increasingly opt for convenience. Logistics are tricky, and finding a profitable business model has been complicated because of the large upfront costs to get close to customers.

“Vegetables and meat and dairy delivered to your door, that’s the tipping point we’re at right now,” said Michael Norris, research and strategy manager at AgencyChina. “The hypermarkets haven’t quite adjusted to these changing dynamics—that it isn’t necessarily shoppers finding products but products finding shoppers.”

Online food delivery has grown quickly in China, accounting for 45% of the global market, according to Sanford C. Bernstein.

To compete in the fast-delivery market, products should be within 3 kilometers, or about 2 miles of the consumer to arrive within a half-hour of ordering. Hypermarkets’ locations on the edges of cities make that difficult. 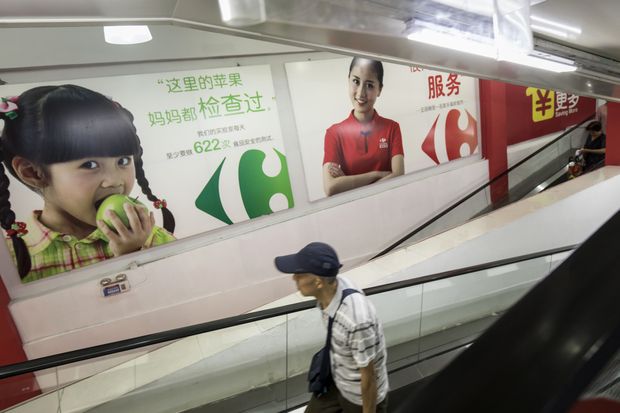 Carrefour has agreed to sell an 80% stake in its China unit to Suning.com.

Carrefour didn’t respond to requests for comment. The stock rose slightly in Paris on Monday.

The French company helped change the retail landscape in China. When the retailer entered the country in 1995, it was one of a handful of Western grocery chains here.

“They’ve been around for so long, so to invest in e-commerce and e-commerce logistics and warehouses would be a totally new endeavor in what is already a very low-margin business,” said Ker Zheng, a consultant with Azoya, which advises global retailers and brands that are setting up e-commerce businesses in China.

Suning said the partnership would combine its delivery network and digital strategy with Carrefour’s global supply chain and supermarket-management experience. For the Chinese retailer, the deal is seen enabling it to diversify beyond consumer electronics and appliances.

In the past few years, direct delivery has become a way of life for Chinese consumers. So-called big data and the build-out of logistical operations have extended this trend to groceries, allowing stores to plan better and get fresher food items to customers faster.

At Alibaba’s Hema stores, shoppers browse in the same space where employees fill bags with online orders that are placed on conveyor belts. At JD.com-backed 7FRESH supermarkets, customers can inspect produce and peruse other items, then use a mobile app to place their orders for delivery.

Walmart said that by year-end its more than 400 stores in China would offer one-hour delivery through its partnership with JD.com.

E-commerce platforms such as Pinduoduo and Taobao, as well as WeChat, feature farmers live-streaming and selling their goods directly to consumers.

The grocery race also has retailers snatching up suppliers for popular products. In April, JD.com signed a deal that grants it access to nearly a quarter of Thailand’s supply of durian in a three-year agreement valued at five billion yuan ($728 million). Durian, a tropical fruit famous for its gym-sock stench, has recently become wildly popular in China.