Beijing-based Luckin Coffee said in a filing Monday that it wants to sell shares on the Nasdaq as part of its ambitious expansion plans.
Despite being barely 18 months old, Luckin has opened more than 2,300 outlets across China and plans to open another 2,500 by the end of this year. If that happens, the company will oust Starbucks (SBUX) as China’s biggest coffee chain. 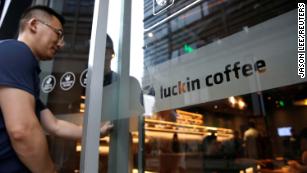 This coffee company thinks it can beat Starbucks in China
Luckin has not said how much it plans to raise or when its initial public offering is likely to happen, but the firm has previously raised hundreds of millions dollars from big international investors including Blackrock (BKCC). Following the company’s most recent fundraising in April, it was valued at about $2.9 billion.
The rapid of ascent of Luckin to challenge Starbucks shows how Chinese upstarts are increasingly rivaling Western brands in one of the world’s top consumer markets. Luckin said Monday it had been boosted by huge growth in coffee consumption in the world’s second-biggest economy to more than 8.7 billion cups last year.
While both Starbucks and Luckin serve coffee, the similarities largely end there. Unlike Starbucks’ trademark coffee shops, most of Luckin’s outlets are tiny booths in out-of-the-way spots that take orders online for both delivery and pickup. 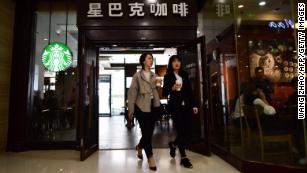 Starbucks CEO says the company is ‘playing the long game in China’
More important, Luckin has placed technology at the heart of its business from the start. Its outlets don’t accept cash, instead customers can only pay through the Luckin app, which offers loyalty bonuses.
China is Starbucks’ second biggest market after the United States. With around 3,000 stores across the country, it’s still bigger than Luckin. Starbucks plans to more than double that number by the end of 2022.
Luckin still faces long-term challenges. The company’s filing with the US Securities and Exchange Commission revealed that it lost more than $240 million last year. Luckin said it could continue to lose money for the “forseeable future.”
Correction: A previous version of this article misidentified the stock market on which Luckin plans to list.